The Year of Mercy

Introducing the Year of Mercy to students

Prayer for the Year of Mercy

Lord Jesus Christ,
you have taught us to be merciful like the heavenly Father,
and have told us that whoever sees you sees Him.
Show us your face and we will be saved.
Your loving gaze freed Zacchaeus and Matthew from being enslaved by money;
the adulteress and Magdalene from seeking happiness only in created things;
made Peter weep after his betrayal,
and assured Paradise to the repentant thief.
Let us hear, as if addressed to each one of us, the words that you spoke to the Samaritan woman:
“If you knew the gift of God!”

You are the visible face of the invisible Father,
of the God who manifests his power above all by forgiveness and mercy:
let the Church be your visible face in the world, its Lord risen and glorified.
You willed that your ministers would also be clothed in weakness
in order that they may feel compassion for those in ignorance and error:
let everyone who approaches them feel sought after, loved, and forgiven by God.

Send your Spirit and consecrate every one of us with its anointing,
so that the Jubilee of Mercy may be a year of grace from the Lord,
and your Church, with renewed enthusiasm, may bring good news to the poor,
proclaim liberty to captives and the oppressed,
and restore sight to the blind.

We ask this through the intercession of Mary, Mother of Mercy,
you who live and reign with the Father and the Holy Spirit for ever and ever.
Amen.

Year of Mercy logo
The logo and the motto together provide a fitting summary of what the Jubilee Year is all about. The motto Merciful Like the Father(taken from the Gospel of Luke, 6:36) serves as an invitation to follow the merciful example of the Father who asks us not to judge or condemn but to forgive and to give love and forgiveness without measure (cfr. Lk 6:37-38). The logo – the work of Jesuit Father Marko I. Rupnik – presents a small summa theologiae of the theme of mercy. In fact, it represents an image quite important to the early Church: that of the Son having taken upon his shoulders the lost soul demonstrating that it is the love of Christ that brings to completion the mystery of his incarnation culminating in redemption. The logo has been designed in such a way so as to express the profound way in which the Good Shepherd touches the flesh of humanity and does so with a love with the power to change one’s life. One particular feature worthy of note is that while the Good Shepherd, in his great mercy, takes humanity upon himself, his eyes are merged with those of man. Christ sees with the eyes of Adam, and Adam with the eyes of Christ. Every person discovers in Christ, the new Adam, one’s own humanity and the future that lies ahead, contemplating, in his gaze, the love of the Father.


The scene is captured within the so called mandorla (the shape of an almond), a figure quite important in early and medieval iconography, for it calls to mind the two natures of Christ, divine and human. The three concentric ovals, with colors progressively lighter as we move outward, suggest the movement of Christ who carries humanity out of the night of sin and death. Conversely, the depth of the darker color suggests the impenetrability of the love of the Father who forgives all. 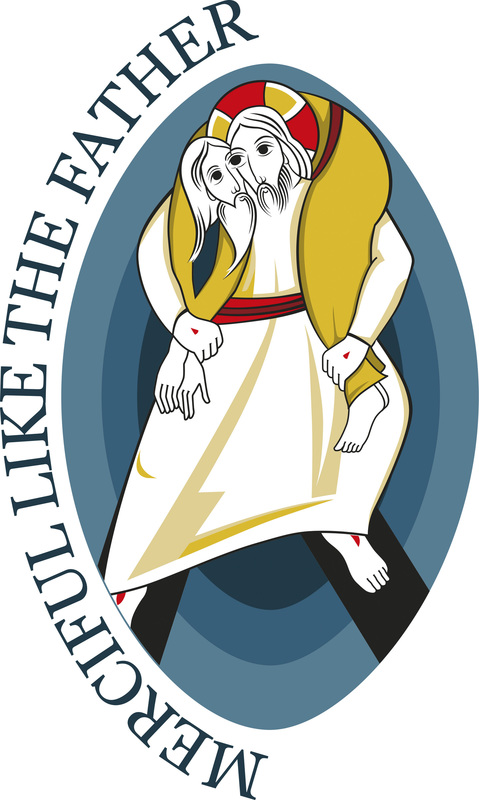